‘Merge commits’ and ‘Squash Commits’ both commands has its own advantages and disadvantages. Personally, I use both commands. I don’t have any strong opinion to support only one command as a best command. Both of them are useful for me :).

In this article, I will explain how and when I am using the “Merge commits” and “Squash Commits” based on situation.

Sometimes you might be working in a feature which has many commits, and you don’t want to maintain the history of all the commits at that time you can use “Squash Commits”. “Squash Commits” will consolidate all the commits into a final big commit. Squash commits helps you to maintain the clean git history. Developers should be mindful and wisely while using this command.

Let me explain why? 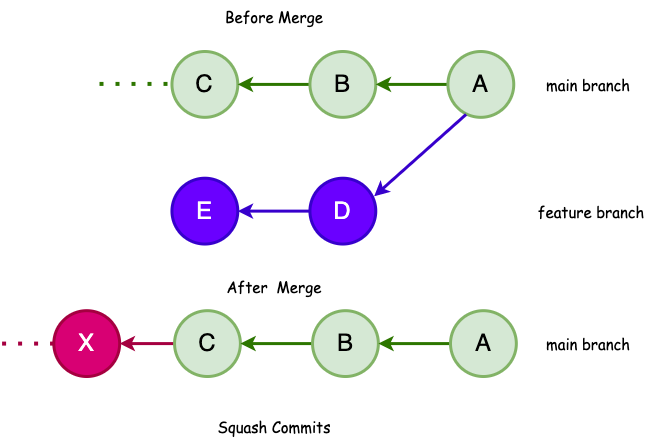 Sometimes you might need to make a lot of commits because you have many formatting issue or you missed the comment in your code or you want to make sure everything is saved before signing out for the day or team environment with code reviews, you often see small commits with messages like fix abc or code review feedback. These are not great commit messages. All those commits might not be that useful. Better not to maintain the history of those commits in your git repository.

In this case, it is better to combine all those commits into a final commit so that your commit history will be clean, and you will not have unnecessary commits. This will simplify your project’s Git tree. But, make sure that you will keep detailed commit messages. Unless you have a particular use-case or reason not to.

I recommend to have meaningful commit for a Pull Request(PR) with detail information by explaining what you’ve done, why you’ve done it, and what is the expected output. This information helps other developers to understand the purpose of commit and PR.

Do we need “Squash Commits” to maintain clean history?#

Instead of making small commits for minor changes you can practice following things:

This will help to reduce the number of commits and helps to maintain clean git history.

Is “Squash Commits” is always good?#

As we discuss above “Squash Commits” is good when you need to combine the commits that are not important or commits which are not essential for future reference. As for example you don’t need to see what are the commits you made for formatting issue.

Combining commits is not always good idea. Sometimes it’s dangerous and will loss the important information. If you use “Squash commits” for the simple reason that will loss the history of the old commits. Which is not good.

As for example let’s say your coworker changed a line of code long time ago and used “Squash Commits” to merge with less information. The same changes is causing the issue. By inspecting with git blame you fond, that changes was made by developer X and he already left the company. Now, you can not ask him because he already left the company and also, you can not find any information why he made that change.

It would be easy for you if he had used Regular “Merge Commits” or “Squash Commits” with detail information.

I will recommend to think before using the “Squash commits”.

“Merge commits” not that much good when you are working in team environment with code reviews, you often make small commits with messages like fix abc or code review feedback or formatting corrected etc. These are not great commit messages. These types of commit make developers life harder when developer have to identify the actual commit which created an issue. 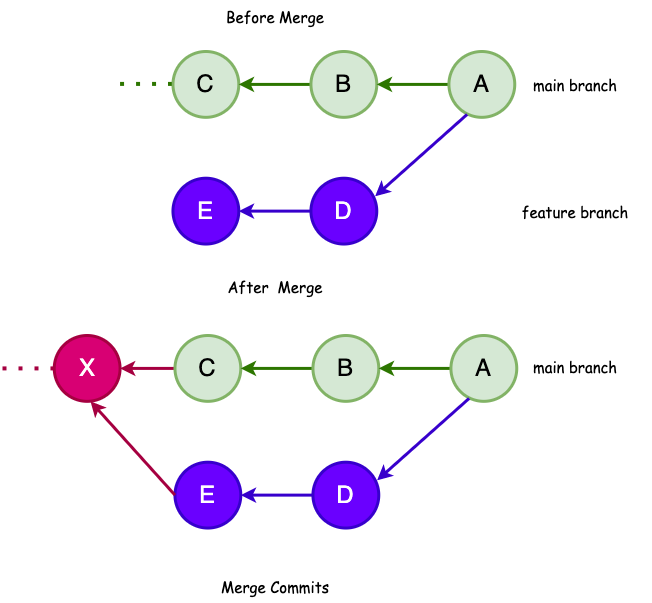 Both “Merge commits” and “Squash Commits” commands has its own advantages and disadvantages. Both has its own use cases. Developers should be mindful and these commands need to be wisely chosen before merging the code. So, that the developers in future will easily understand the commit history. Past commits are the history of project this will tell a story to other developers “how project was developed”. History should be clean and easy to understand.